‘Answers came through the eyes of the Mantids, remote viewing at the microscopic level‘

To many, the following information will read as science fiction. There is a reason for that.

Fictionalizing the truth, mythologizing history, ‘hiding in plain sight’ – this has been practiced by the global el-ites since they first appeared on the scene about 12 thousand years ago, after the cataclysm known as the Great Flood, or the Sinking of Atlantis. Some will argue that they have been here longer than that, as the Annunaki of the Sumerian legends. Again, the line between fact and fiction has been deliberately obscured. My opinion is that the most recent ‘invasion’ of advanced non-human entities can be traced to the appearance of the ‘fish-gods’ in Sumeria at the beginning of our historical era, or rather ‘their’ historical era, as history is one of their primary means of deception.

As humanity struggled to re-establish itself after that immense catastrophe that some call the consciousness fall, an arrival of beings from the Sirius system who set about ‘educating’ us, setting themselves up as ‘Gods’, got us to build temples in their honor, gradually enslaving us with their advanced technology, legal and monetary systems, manipulation techniques and mind-control methods. Once they were well established, they withdrew from our view, setting up viceroys in their place, the ‘royals’ who we were to obey, and priests to continue the rituals of wor-ship.

“The Archons established the practice of ‘Kingmakers’ on Earth’s surface about 12,000 years ago. The history was written and the people were selected to play the main roles towards leading us to the present day.”

The Mantis beings aka ‘trantaloids’ have seen humanoid beings evolve spiritually, scientifically and philosophically. Some of the 6th and 7th dimensional beings from the Zeta-Reticula area were once Sirian or are related to Sirians. The insectoids which are bi-pedal and have advanced to the 6th dimensional level are called upon in this time, the last 100 years, to aid humanity:

“The Mantis are assisting, and in many ways overseeing, the Zeta Reticulan hybrid program, and human spiritual advancement project. Like the Zetas, they were asked by Galactic Councils to participate. They are assuring that universal principals are adhered to as well as giving their expertise in frequency alignment. They are the artists in the hybrid process.”

There are also Mantis Beings who used technology to come into our Earth and who were then captured and have been used to work on the Moon base and other bases. The mantis have exceptional telepathy and are very calm, skilled with equipment and fascinated by human behavior.

“The Mantis beings work and they perform their duties well. These Mantis beings are much different from the higher dimensional Guardians. The Mantis working in these labs are enslaved. Many, if not most of the Mantis who work in the abduction research laboratories have themselves been abducted. They communicate with thoughts, they are telepathic, some are hybrids, and hybridization has occurred to try and produce a telepathic ability to the living reptoids.” 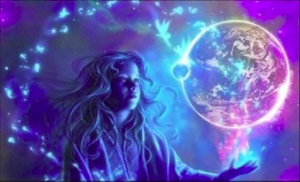 There are over 800,000 Mantis souls incarnated here now and only since the recent hybrid program began. This is a new experience for the race and it is not an easy one. Many of these ‘Starseeds’ feel completely out of place on Earth and in a human body, unless they are of the younger generation who also have Zeta DNA. These souls have it easier as there is a lot of Mantis frequency in their chemistry that is aligned with their soul being. Those born prior to the 90’s, and there are not as many of these, may have had a hard adjustment period in life.

“They are writers, musicians, poets, designers of space and events. They have a knack for bringing pieces of a puzzle together and making it sing. Their gifts lie in bringing energy, aesthetic appeal, and vitality to whatever they do. They are here to use these gifts to infuse higher frequencies into hearts and environments through form, sound and color.”

All excerpts are from the book:

2 thoughts on “The Ancients – The Mantids ‘Guardians of the Light’”