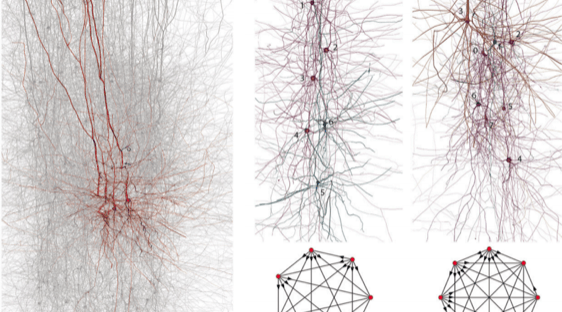 There is a complex sub-synaptic architecture that gives the dendrite the processing power normally attributed to a multi-layered neuronal network—i.e. the dendrite alone can perform complex computations, and hence the multi-parallel processing power of a single neuron is far beyond what was conventionally assumed.” William Brown, Resonance Science Research Scientist

Dendrites are branched protoplasmic extensions of the cellular membrane of the neuron. Like a tree forming branches from the trunk, dendrites are arborizatons from the neuron soma that contain the synaptic architecture necessary to receive, process, and transmit electrical signals (from the axons of adjacent neurons). In some classes of neurons, there are thousands of dendrites, and when summing all of the subsynaptic structures, a single neuron can form as many as 100,000 signal processing / integrating connections—so extensive that when modeling such connectivity one research team utilized a mathematical manifold of 11-dimensions.”(The “Eleven Dimensional” Brain? Topology of Neural Networks)

The new research by Professor Matthew Larkum, a neuroscientist at Humboldt University, and his team has uncovered a rarely before seen information processing system in single dendrites of pyramidal neocortical neurons that uses graded signal processing with calcium-mediated dendritic action potentials, as opposed to the typical all-or-nothing action potentials observed in sodium and potassium ion flux.

Within each cell there is a veritable macromolecular brain, at least in terms of structural complexity, and perhaps to a certain degree functional complexity as well—a fractal hierarchy. This means that the extremely simplistic view of the synapse as a single digital bit is misrepresenting the reality of the situation.”