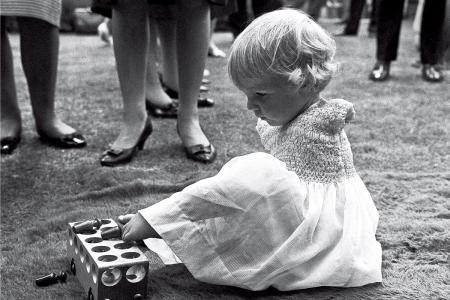 10,000 or more children around the world born in the ’50s and ’60s who suffered greatly, and still do, as adults because their mothers ingested the notorious drug thalidomide, they were born without legs or arms or with foreshortened limbs.

The over-the-counter tranquilizer was hailed as a wonder drug when released in the late 1950s. Its maker, Chemie Grünenthal, a small German company relatively new to pharmacology, marketed it aggressively in 46 countries with the guarantee that it could be “given with complete safety to pregnant women and nursing mothers without any adverse effect on mother and child.”

“Adding to the dark shadow over the company, it is increasingly clear that, in the immediate postwar years, a rogues’ gallery of wanted and convicted Nazis, mass murderers who had practiced their science in notorious death camps, ended up working at Grünenthal, some of them directly involved in the development of thalidomide. What they had to offer was knowledge and skills developed in experiments that no civilized society would ever condone. It was in this company of men, indifferent to suffering and believers in a wretched philosophy that life is cheap, that thalidomide was developed and produced.”

The fact that former Nazi Party members were recruited by Grünenthal was not altogether surprising. Major American companies such as Standard Oil and Du Pont maintained commercial links with the Nazi regime during the war and afterward recruited former Nazi scientists, too.

Perhaps the best known of Grünenthal’s murderous employees was Otto Ambros. He had been one of the four inventors of the nerve gas sarin.

He was Hitler’s adviser on chemical warfare and had direct access to the führer—and committed crimes on a grand scale. As a senior figure in IG Farben, the giant cartel of chemical and pharmaceutical companies involved in numerous war crimes, he set up a forced labor camp at Dyhernfurth to produce nerve gases before creating the monolithic Auschwitz-Monowitz chemical factory to make synthetic rubber and oil.

In 1948 Ambros was found guilty at Nuremberg of mass murder and enslavement and sentenced to eight years in prison. But four years later, he was set free to aid the Cold War research effort, which he did, working for J. Peter Grace, Dow Chemical, and the U.S. Army Chemical Corps. Ambros was the chairman of Grünenthal’s advisory committee at the time of the development of thalidomide and was on the board of the company when Contergan was being sold.

The central figure at the Grünenthal trial in Aachen was Heinrich Mückter. During the war, his expertise had been anti-typhus work. Outbreaks of the disease in the Army made finding a vaccination a high priority. Because typhus culture cannot live outside a body, it was kept alive by injecting it into prisoners. Once injected with the disease, the prisoners could then be used to try out the vaccines to see if they worked, and Mückter’s experiments were reportedly carried out in Auschwitz, Buchenwald, and Grodno as well as at Kraków.

The “chemical brains” behind thalidomide may have been Mückter’s mentor, Prof. Werner Schulemann of Bonn University, according to Martin Johnson, a longtime campaigner at Britain’s Thalidomide Trust. Schulemann had developed the first synthetic antimalarial drug and carried out human experiments in field hospitals and in the camps. But it was Mückter’s work on anti-typhus vaccines trialed in the camps that Johnson believes may provide the link to thalidomide, a line he is pursuing for the book he is writing on the thalidomide story, provisionally titled The Last Nazi War Crime.