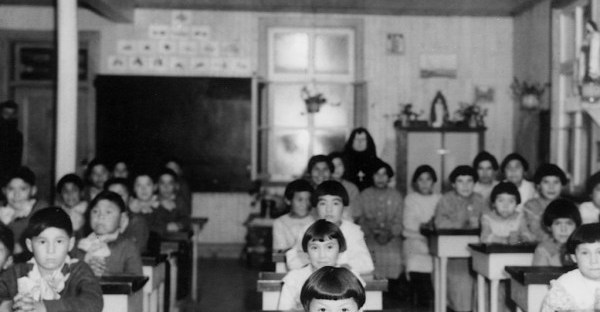 In Canada, the Indian residential school system was a network of mandatory boarding schools for indigenous peoples. The network was funded by the Canadian Department of Indian Affairs and administered by the school system created to isolate Indigenous children from the influence of their own native culture and religion in order to forcefully assimilate them into the dominant Canadian culture. Over the course of the system’s more than hundred-year existence, around 150,000 children were placed in residential schools nationally. By the 1930s about 30 percent of Indigenous children were believed to be attending residential schools. The number of school-related deaths remains unknown due to incomplete records. Estimates range from 3,200 to over 30,000.

Numerous works address the stories of former residents of in Western New York and Canada, such as Thomas Indian School, Mohawk Institute Residential School (also known as Mohawk Manual Labour School and Mush Hole Indian Residential School) in Brantford, Southern Ontario, Haudenosaunee boarding school, and the Carlisle Indian School in Pennsylvania; the impact of those and similar schools on their communities; and community efforts to overcome those impacts. Examples include: the film Unseen Tears: A Documentary on Boarding School Survivors, Ronald James Douglas’ graduate thesis titled Documenting ethnic cleansing in North America: Creating Unseen Tears, and the Legacy of Hope Foundation’s online media collection: “Where are the Children? Healing the Legacy of the Residential Schools”.