“The Agarthan colonies were established as a natural result of the primary star gates which are doorways from the galaxy and which provide entry and exit portals. On the surface of the Earth there were erected stone circles, pyramids and monolithic doors (usually part of larger structures) at these portal gates.”

[From: Ascension Earth; Birth of A New Sun by Cumberland Academy]

“The area around Point Conception is one of strategic importance to both cultures. For the Chumash it is spiritually strategic as the spot where the souls of the dead depart for Shimilaqsha, (Shamballah?) Chumash realm of the dead.”

The Chumash
The coastline of southern California between San Diego and Los Angeles lies generally in a north/south direction, but as it proceeds northward, it slowly curves toward the west until at Santa Barbara, the coastline lies in an east/west direction. At the extremity of this westward curve lies Point Conception. The Chumash call it Humqaq, ”The Raven Comes”, and regard it as one of the most sacred sites not only in Chumash territory, but in all of North America, the ”western gate” of the continent.

At this writing, Humqaq lies at the center of a bitter controversy in which the spiritual traditions of Native America clash with one of the most exalted technological projects of the United States government. The area around Point Conception is one of strategic importance to both cultures. For the Chumash it is spiritually strategic as the spot where the souls of the dead depart for Shimilaqsha, Chumash realm of the dead. For the Americans, nearby Vandenburg Airforce Base is perhaps the most militarily strategic location on the Pacific coast, from where inter-continental ballistic missiles are launched out into the ocean, and rockets into space.

The American space industry will ironically develop this site – used for thousands of years as a departure point into the Milky Way by the Chumash souls of the dead – as a technological departure point into space. The immense profits to be made in such projects as finding water on the Moon and providing regular commercial freight and passenger service into space have stimulated a space race between the US and Russia, China, Europe and Japan. John Anderson, who has published several books on the Chumash, wrote recently:

‘Much academic knowledge and pseudo-knowledge is being used to help pave the way for the commercialization of southern California’s last untouched natural beauty by sabotaging legitimate aboriginal claims in the legal process.’

In December of 1997 an article entitled “Anthropology and the Making of Chumash Tradition” appeared in the journal Current Anthropology, written jointly by Haley and Wilcoxon who “acknowledged that their research on the Chumash Indians and their relations to Point Conception was partially paid for by the aerospace industry which was building the California Spaceport nearby on the Vandenberg Air Force Base.” Haley and Wilcoxon wrote that:

“Chumash traditionalists lack the kinds of biological and cultural linkages with the region’s aboriginal past that they claim – few are descendants of the aboriginal inhabitants they consider their ancestors.”

Humqaq is regarded by the Chumash as the Western Gate of the continent, with the Chumash as its traditional keepers. Haley and Wilcoxon state that this notion in fact is an invention of anthropologists who read ‘December’s Child’ (Thomas Blackburn’s much-quoted book of Chumash mythology, history and folklore collected by John Peabody Harrington as told to him by María Solares). The fact of a western ”gate” in Chumash mythology mentioned by a very knowledgable Chumash person at the beginning of the century, María Solares, none of these skeptics can deny. María’s source for the story of the “gate” was Ygnacio Telenahuit (1789-1865). His source was possibly María’s paternal grandfather Estevan Colocutayuit (1775-1846.) The source for the latter, and the age of the story, no one knows.]

The most thorough research on Chumash culture was carried out by John Peabody Harrington, who was born in Massachusetts in 1884 and died in California in 1961. (An account of this extraordinary and quirky man can be read in Encounter with an Angry God, written by his ex-wife and colleague, Carobeth Laird.) Harrington began working with the Chumash in 1912 and interviewed Chumash consultants on many topics, but seldom asked them direct questions. He asked general questions to get his consultant talking, and then copied down everything in minute detail:

Humility dictates that neither I nor any other non-Chumash person will ever to be able to know. It is obvious that in an oral culture over eight thousand years old, most ”data” remains in the private sphere of individuals and families who equally as obviously have no wish to reveal it to the “dominant society” which has always been hostile to them. One angry Chumash man at the museum meeting in Santa Barbara in 1992 asked, “Why do we have to prove to you [scientists] who we are?”

Secrecy was also a trait of the Chumash spiritual brotherhood called ’antap. Hudson and
Underhay wrote that none of Harrington’s many Chumash consultants were ’antap officials. This is perhaps explained by a code of secrecy intrinsic to the brotherhood which prevented any collaboration with white academics. His main consultant, Kitsepawit (Fernando Librado) had participated in the funeral rites of Rafael Solares (”of the sun”), one of the last known ’antap. Kitsepawit (1839?-1915) was raised at the Mission La Purísima, outside present-day Lompoc on the California central coast. One of Harrington’s notes reveals that Fernando himself was not allowed to touch the sacred charmstones, because he was ”too friendly with the enemy [white people].” [Acta Americana, Vol. 8, No. 1, 2000, Uppsala University, Sweden]

So if the Chumash are not culturally or ethnically related to the aboriginal indigenous peoples of the region, who are they and where did they come from? How long have they been here? Where did they get their mythology of  ‘Western Gate’ portal of the Dead? What role did the Catholic/Jesuit/Templar missionaries at ‘Mission La Purisma’ play in securing this sacred ‘portal’ area long before the establishment of California and Hollywood as centers of deception and mind control? How long ago was this deception prepared? 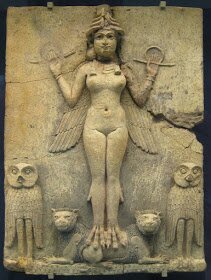 From “Ascension Earth; Birth of a New Sun”:
One of the secrets or deceptions, is the loss of the Atlanteans, the Lemurians, the Egyptians, the Giants and the Trolls, the Star People and Fairies. The Hopi and Maya were keepers of the celestial and spiritual teachings, the At-lans were keepers of the Medical and technological advancements. The Lemurians were keepers of the Mystery teachings. Many of these beings are dark of color and others are lighter, so light that as they advanced they glowed. Advanced, higher dimensional beings can take physical form, and these beings form councils and federations. They have been known to us humans for as long as there have been humans. They are painted on rock art, carved into stone, and written about in the earliest recorded texts. A concerted effort to deceive earth humans at this time as we go through our next great ascension process has been as a result of the dark force energy, which grows with every epoch of our solar system, but it is now the time of the Rainbow tribe.

At-lans
‘Humqaq is not only sacred to the Chumash, but to other Californian tribes, and even to tribes as far away as Montauk Point on Long Island, the Eastern Gate on the Atlantic coast. A few years ago the Chumash elder from the Owl clan mentioned above told me of his visit to Montauk Point as the guest of a Shinnecock elder. They call themselves the Eastern Gate-Keepers and are aware of Humqaq Point as the Western Gate.’

Why is Marduk, patron deity of Babylon, on the Vatican Crest?
In a ‘christian-sham-appearance’ the lord of darkness speaks through the mouth of the one that calls himself ‘replacer of God on Earth’: Fili Vicarus Dei.” 1

“MARDUK: The Snake-Dragon-Sungod from Ancient Babylon” by Phil Jayhan
“Vatican: priesthood of Marduk because of Emperor Heliogabalus
“In the Vatican-museum the Vatican proudly displays and cherishes its Crest; the
snake-dragon of Marduk. It is also their oldest piece. Roman Emperor Heliogabalus
(218-222) introduced the Akitu-festival in honour of Mardruk during his reign in the
third Century.”

“In the following early fourth Century Emperor Constantinus formally founded the Roman-catholic church, that carries the Vatican-Crest of Marduk; clearly a church based on the trinity-sungod from ancient Babylon!!!
“Roman-catholic Church provides the foundations of the EC
“Everything the Roman-catholic Church is built on is also the foundation of the
European Community. The crest of the EC -the blue flag with the 12 stars on it in a
circle- represent ‘the virgin’ or ‘Cybele’; also known as Astarte or ‘the goddess’. The female ‘lady liberty’ of the sungod of Babylon (Our Statue of Liberty was patterned after the goddess, Libertas, the Roman
personification of freedom.)
“It was Arsene Heitz that created this EC-symbol. He clearly tells us why and how he
chose this symbol”…
“The European Parliament-building in Strassbourg is a copy of the Tower of Babel
that was painted by the Belgian painter Breugel. And that the EP really means
bussiness with the Babylonian Tower is also illustrated by their poster with a modern
version of the Tower of Babel on it; above the building a set of satan-stars in the
sky… Beyond any doubt this states what their intentions are with Europe: finishing
what has started more than 3.000 years ago in Ancient Babylon.”
Royal bloodlines
MARDUK
Marduk, the ‘god’ son of Enki, who ruled the Great Age of Aries. Please find links to a substantial amount of resources: https://twitter.com/sojmed/status/1125125772438589445?s=19 or https://medicine-tribe.com/2018/02/10/chapter-8-the-storm-there-are-no-secrets/amp/?__twitter_impression=truehttps://medicine-tribe.com/2018/02/10/chapter-8-the-storm-there-are-no-secrets/amp/?__twitter_impression=truek

3 thoughts on “The Chumash”