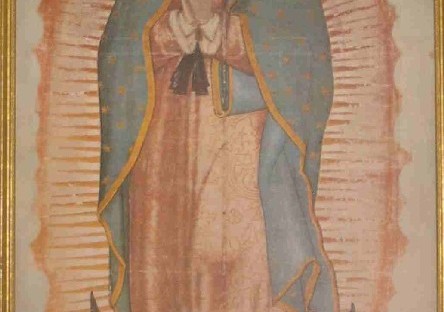 Just before dawn on December 9, 1531, a poor, 57-year-old widower named Juan Diego was walking through the hills outside Tenochtitlan, Mexico (the Guadalupe area that is near modern Mexico City), on his way to attend church. He began hearing music as he walked closer to the base of Tepeyac Hill, and at first, he thought the beautiful sounds were the morning songs of local birds in the area. But the more Juan listened, the more the music sounded, unlike anything he had ever heard before. Juan started to wonder if he was hearing a heavenly chorus of angels singing.

Juan gazed toward the east (the direction from which the music came), but as he did so, the singing faded, and instead, he heard a female voice calling his name several times from atop the hill. So he climbed to the top, where he saw the figure of a smiling girl of about 14 or 15 years old, bathed within a bright golden light. The light shone outward from her body in golden rays that illuminated the cacti, rocks, and grass around her in a variety of beautiful colors.

The girl was dressed in an embroidered red and gold Mexican-style gown and a turquoise cloak covered with golden stars. She had Aztec features, just as Juan himself did since he was of Aztec heritage. Rather than standing directly on the ground, the girl stood on a type of platform in the shape of a crescent that an angel held for her above the ground.

Guadalupe, Mother of the New Creation

“The missionaries could not understand the religious symbolic world of the native people. They believed that whatever was different was diabolical and had to be eliminated. They also had to struggle against the pain that the people could still remember: the trauma of their brutal conquest. The natives would hear the message of the Gospel, the message of God’s love and compassion, but the lifestyle they saw was totally the opposite. So there were two totally antagonistic religions and cultures coming together, but there seemed to be a complete lack of communicability. I feel that the story of Our Lady of Guadalupe, which happened in 1531, is the key to knowing how we can build the new Church for the new millennium, the Church that will help us to turn what could be a destructive problem into a fascinating moment, a breakthrough of the spirit for humanity.”

1 thought on “The Virgin Mary’s Apparitions and Miracles in Guadalupe, Mexico”