Burdock is yet another example of a despised weed that gives us generous and powerful food and medicine . . .

Its long taproot grows deep into the earth, pulling up nutrients to create medicine that herbalists use for chronic or deep illnesses.

The burrs — which are a bane of ranchers, farmers, and animal owners — protect the powerful seeds that are strong-acting against acute infections.

The Powers of Burdock Tea

The burdock plant is one that certainly stands out amongst others. A member of the thistle family, it grows easily on a variety of different terrains, its large leaves making it easily spotted. 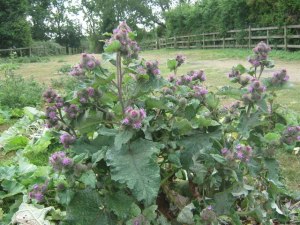 In the traditional herbalism of Europe and North America, burdock (Arctium lappa, A. minus) is probably the most prominent herb for skin complaints, such as acne, boils, or eczema.

Burdock root is the answer to skin problems such as acne and psoriasis.

2. Burdock tea has been used as an herbal remedy and soothing tonic since the Middle Ages and beyond. It is commonly used today in traditional Chinese medicine.

My Tweets
In Search of Black Assassins