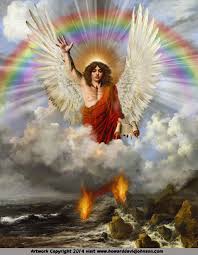 The Angel and the Small Scroll

1And I saw another mighty angel come down from heaven, clothed with a cloud: and a rainbow was upon his head, and his face was as it were the sun, and his feet as pillars of fire: 2And he had in his hand a little book open: and he set his right foot upon the sea, and his left foot on the earth, 3And cried with a loud voice, as when a lion roareth: and when he had cried, seven thunders uttered their voices. 4And when the seven thunders had uttered their voices, I was about to write: and I heard a voice from heaven saying unto me, Seal up those things which the seven thunders uttered, and write them not. 5And the angel which I saw stand upon the sea and upon the earth lifted up his hand to heaven, 6And sware by him that liveth for ever and ever, who created heaven, and the things that therein are, and the earth, and the things that therein are, and the sea, and the things which are therein, that there should be time no longer: 7But in the days of the voice of the seventh angel, when he shall begin to sound, the mystery of God should be finished, as he hath declared to his servants the prophets.