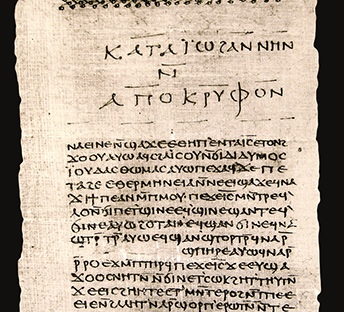 It was once believed that after the Church had determined the contents of the canon, all of these additional (non-canonical) texts were abandoned, hidden or destroyed. In “‘Lost Gospels’—Lost No More” in the September/October 2016 issue of Biblical Archaeology Review, Biblical scholar Tony Burke challenges this assertion.“

The word “Apocrypha” means “Secret,” but by the end of the second century the term had taken on the pejorative meaning of “false” or “spurious.” Christians were urged to avoid reading these rejected texts because, as bishop Athanasius of Alexandria wrote (c. 367 C.E.), they “are used to deceive the simple-minded.”

However, It has become increasingly clear that the Christian apocrypha were composed and transmitted throughout Christian history, not just in antiquity. And they were valued not only by “heretics” who held views about Christ that differed from normative (or “orthodox”) Christianity, but also by writers within the church who did not hesitate to promote and even create apocryphal texts to serve their own interests.

To some extent Christian apocrypha have been with us for as long as the texts of the New Testament. Arguments have been made for dating some of them to the first century. Several “lost” Jewish-Christian gospels—the Gospel of the Hebrews, the Gospel of the Nazareans and the Gospel of the Ebionites—are known today through quotations from these gospels made by early church writers such as Jerome and Origen. Other early apocrypha are preserved in part within the New Testament:– The gospel that scholars refer to as Q is a hypothetical document that consists of sayings of Jesus, some of which have been included in the canonical texts of both Matthew and Luke. However, Q itself was not accepted for inclusion in the New Testament canon. We know it only from common quotations in Matthew and Luke.

After the invention of the printing press, scholars began to travel the world in search of ancient manuscripts that they could bring to light again with the use of this new invention.

Another modern “invention” has also aided in the scholarly understanding of the history of Christian apocrypha: Archaeology. At Egyptian sites such as Oxyrhynchus and Akhmîm, archaeologists have unearthed texts or works that were previously known only from their mention by other ancient authors.

The most famous discovery of Christian apocrypha is the Nag Hammadi Codices, a cache of over 50 texts discovered by Bedouin in 1945 in a mountainous area dotted with caves near the town of Nag Hammadi in Upper Egypt. The 13 codices contain 14 apocryphal texts, including a complete copy of the Gospel of Thomas, the Gospel of Philip and the Gospel of the Egyptians, as well as dialogues, acts, letters and apocalypses.

The Nag Hammadi Library was a goldmine of apocryphal literature that, to some scholars, redrew the history of Christianity.

It has become increasingly clear that Christianity began as a multitude of voices, each one declaring itself right and others wrong. One, led by the Roman Church, appeared to emerge as victor, determining the canon of the New Testament, effectively silencing contrary beliefs and casting itself as the true heir to the teachings of Jesus.

However, the shape of the 27-book New Testament canon was not settled in the fourth century after all. The Bible took on different shapes in parts of the world outside of Roman influence.

The New Testament of the Eastern Orthodox Church, centered originally in Constantinople & separated from Rome in the fifth century did not include Revelation until the 10th century.

Farther east, the Syrian Orthodox Church, established in 451 C.E., until recently read from a New Testament that lacked five of the 27 texts and once included 3 Corinthians. So enamored was Syrian Christianity with apocryphal texts that monasteries throughout Turkey and Iraq have become a major source for manuscripts of Christian apocrypha.

Still farther east, the Bible of the Armenian Church included 3 Corinthians and the Martyrdom of John. And the Bible of the Ethiopian Church today includes not only additional Old Testament texts, including Enoch and Jubilees, but a New Testament canon with several texts related to church organization and practice along with the Book of the Covenant, the Book of the Rolls and others.