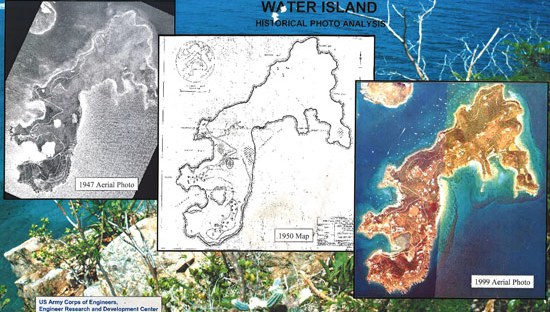 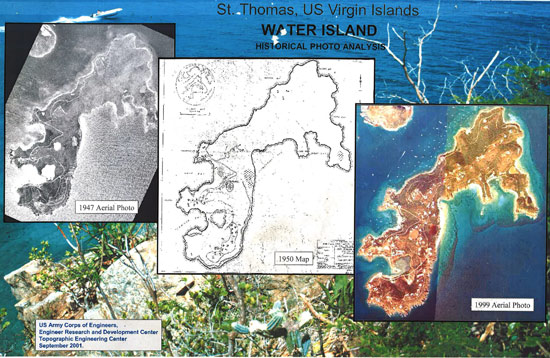 A tiny 500 acre island in the Caribbean Sea. Just a little speck really. It kind of makes you wonder why the World War II U.S. military spent $1.6M (about $19M in 2010 dollars) between 1940 and 1946 to build an elaborate array of defensive positions and ancillary support facilities. What could be so important for this speck of an island to become a military outpost during the “War of Our Fathers”?

A radio station and submarine base was established on St Thomas during WW I.

1905, the East Asiatic Company purchased Water Island. The American consular representative in St. Thomas shared a prevailing opinion that the East Asiatic Company (reportedly controlled by Germany’s Hamburg American Steamship Line) was actually fronting for the German Government, which was surreptitiously endeavoring to establish a German commercial and naval base on St. Thomas .

If this was true, the East Asiatic Company may have acquired Water Island in order to guarantee its long-term availability for the exclusive use of the German Navy.

A radio station and submarine base was established on St Thomas during WW I.

1939, the Navy leased 225 acres to build a submarine base in the area now known as Crown Bay. 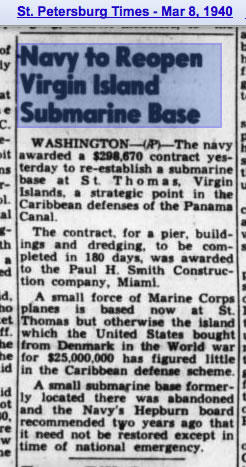 1941 (date unknown) the War Department stated the need for artillery and other support for the Submarine Base on St Thomas. Artillery and searchlights were proposed for Water Island.

On 19 June 1944, the U.S. Department of Defense acquired Water Island from the East Asiatic Company (West Indian Company) thru condemnation proceedings (eminent domain) for $10,000 for the explicit purpose of establishing a coastal defense installation on the island. The military facility on Water Island was named Fort Segarra.